Mac buyers love the Next Generation Macbook. They are super thin and light, and just amazing to look at, with their distinctive colors and stunning Retina displays. And now, Gainsaver has a complete selection of used and refurbished Early 2016 Macbooks in stock and ready to deliver.

The only thing better than a Next Generation Macbook is the great deals you can find at GainSaver on just the refurbished Macbook you’re looking for.

These are the refurbished Early 2016 Macbooks at GainSaver.

On the outside, the Early 2016 Macbooks are identical the Early 2015 Macbooks. The only exception to that is with the new Rose Gold Macbook, which was first introduced in Early 2016.

The Early 2016 Macbooks have the same style of enclosure, Retina screen and keyboard. They also weight exactly the same amount. Many of the specifications are the same for both generations.

The Early 2015 and Early 2016 Macbooks have no internal fan, so they can be made very thin. Along with the size and weight, the other nice feature is that the Macbooks run silently without a fan. This makes them ideal for taking notes in class or documenting the events in a business meeting.

Each of the four colors in the refurbished Early 2016 generation of Macbooks are available with three different Intel Core M processors, each one running at different speeds. The processor is the most important consideration when it comes to price and performance. These are the processor options you can choose from.

All of the Early 2016 Macbooks with the Intel Core m5 run at 1.2GHz. This is the mid-range speed for this generation. The Turbo Boost feature for the Core m5 jumps the clock speed up to 2.7GHz as needed to keep your software running smoothly.

The sixth generation Intel Core M processors in the Early 2016 Macbooks all incorporate the same Intel HD Graphics 5300 graphics processor. The HD Graphics 5300 is a more powerful graphics processor that is 25% faster than the one in the fifth generation processors used in the Early 2015 Macbooks. So in addition to more computational power, you’ll notice the speed improvement in all of your applications that depend on graphics, like games, design programs and video playback.

Which Macbook generation is best for you?

Prices change fast, so the best thing is to use the GainSaver website features to narrow down your search and compare the prices and specifications.

Choose the Macbooks option for menu at the top of the browser to see all Macbooks available at GainSaver. 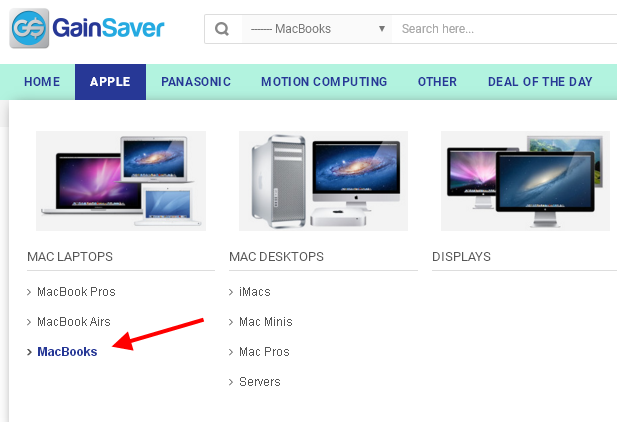 Under the Shop By filters on the left side of the screen, you’ll see links that let you view only the Macbooks you want. You can filter your selection by Year, Color and Processor Type. You can also choose multiple filters to see, for example, only Rose Gold Macbooks from Early 2016.

Which Early 2016 Macbook is best for you?

Once you’ve decided on purchasing a GainSaver refurbished Early 2016 Macbook, the next choice is which speed is best for you? If you plan to run a lot of programs on your Macbook that demand higher performance, such as fast, graphical games, large business applications or audio and video production programs, go with the faster Macbooks. Otherwise, you’ll be very satisfied with the Core m3 systems.

One other consideration is that the 1.1GHz, Core m3 Macbooks have lower capacity flash drives. So if you plan to store a lot files like images and videos on your Macbook, then go with the faster Intel Core m5 and Core m7 systems. They have twice the standard file storage capacity as the Core m3 Macbook.

Whichever 12-inch refurbished Early 2016 Macbook you decide to buy, you’re protected with the GainSaver 30 Day Money Back Guarantee. You can return your refurbished Macbook for any reason, no questions asked. You can return for a refund or exchange. So if you discover that you should have gotten a different color Macbook or a faster Macbook, no problem! We make it easy if you change your mind.

So browse through our complete selection of Early 2015 and Early 2016 used and refurbished Macbooks and shop with confidence that are getting a great deal on a top quality refurbished Mac laptop you will love. Guaranteed.